The National Hamfest is upon us again and I am looking forward to seeing you there. I will be conducting the Morse Tests and although I haven’t got a stand for the Morse Crusade this year I will be available for a chat if anyone wants. I have other duties as Outside Trade Manager at the National Hamfest, but if anyone wants to find me, just go the the Hamfest Information Desk and they will contact me and I will come and find you or tell you where I am.

I like to chat to other people about how they have learned Morse, or about any problems they are having as this always gives me more information how people rate different ways of learning so please share your Morse experience with me.

While on this point of sharing experiences. I have a lot of visitors on this website who read the information they want without commenting on anything or sharing their experiences. Please share you experiences as it will help others on their journey through learning Morse properly.

Hope to speak to you at the National Hamfest 2012

I am sorry for any downtime of this website, I have been having problems with the www.g5fz.co.uk website which has also effected all the sub-domains on the server. This problem has now been fixed but at the moment I must concentrate on re-building the main website and should get back to the Morse Crusade when I have finished ( hopefully soon :O)  )

I would like to thank Robin G3TKF for informing me that trying to access the Morse Crusade using an I-Phone was impossible.

This glitch has now been remedied and if anyone else has problems accessing this web site, please inform me and I will try and sort it out

This is the best site review I can have from someone who is slightly illiterate and is taken from the link I have on the eHam.net website. I am confused by them using the word “obsolete” as I thought it meant no longer manufactured or no longer used but in the Morse context it is certainly the wrong word to use. END_OF_DOCUMENT_TOKEN_TO_BE_REPLACED

Due to a bug in the system, for a while Comments were stopped or disabled, this has now been sorted and Comments are welcome on this site as it makes it more interactive so if you have something to say about a posting then please comment on it.

Happy New Year and lets make our New Year resolution to help others achieve the same enjoyment we get from using CW.

I have had good news from Tom EI5CA about the Morse Class he started late last year and he has ended up with 5 students dedicated to learning Morse. Well Done Tom and hope you will share your experience with us.

I am giving a presentation using Microsoft Power Point at my own club in February which will then be the start of a club Morse Training Group for all levels of CW, I seem to have plenty of interest at the moment for it.

If anyone wants my Power Point presentation I will put a download on this site once I have polished it up.

I would like to hear from anyone else starting teaching Morse and how it worked out for them so either comment on this post or send me a message.

A Happy and Prosperous New Year to All 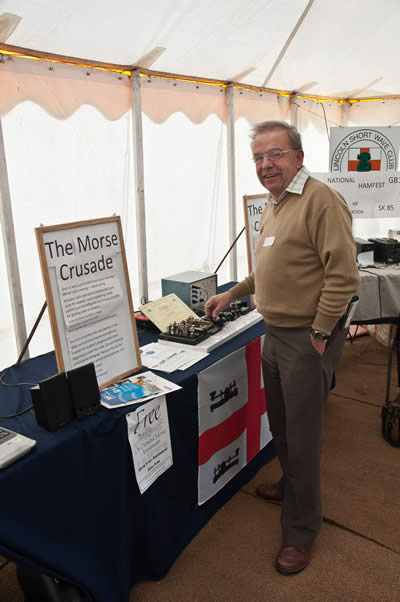 The Morse Crusade stand at the National Hamfest 2011 was a complete success with over 50 visitors signing the Guest Book.

I apologise for not being at the stand all the time, but I was also taking the Morse assessments, next year I will be having more help so their should always be somebody on the stand.

Eight Morse assessments with three passes, it looks bad but four assessments were for 30wpm and the candidates could not write it down even though they could take in in their heads. I have told them to learn to touch type and next year will have a proper keyboard for them to use so I hope their will be more success at higher speeds next year.

When I started the Morse Crusade I knew I had to let it evolve because I was blinkered by being trained professionally using the Koch Method and wanted the opinion of others so that the website could evolve with an open mind.

I though that The Morse Crusade was going to be controversial like Darwin’s publication “The Natural Evolution of the Species” and it was going to be difficult to convince others about the pitfalls which can happen in learning Morse Code, however I have been proved wrong and very pleased with the positive comments I have had from everyone, so a big THANK YOU to everyone who has contributed to the Morse Crusade.

I received the message below today and thought that I need to put a “Guidance” section on this website. Before receiving this, I was going to point to other websites for information, but although there was good information out there, it was not complete.

I found difficulty in the Old Method. It’s good to know that you are going to put it right. And CW is gaining interest down here in Brisbane

So Harry you’re putting a lot of weight on my shoulders and making me put my head on the block, because I am going to write a guide on learning Morse with the good points and the bad points. I again would appreciate comments from others about their experiences so the guide can be as comprehensive as possible

I am still building up the Crusade and thank Southgate ARC for putting it on their news, I would also like to that everyone who has posted comments on the website as everything helps to move the Crusade forward and although it’s still in it’s infancy I am optimistic that it will grow. If we even get one Morse Instructor or one student to change their views then we have succeeded.

The Morse Crusade can be followed now on the following sites, so join and add your voice to the Crusade;

This is not a revolution to take over and throw to one side other Morse Groups and take over the world of Morse, we would like to think it is more of a crusade to change the way of thinking in training Morse and work with other clubs, groups and societies. To promote Morse and to find a standard way of training that is not detrimental to the learner. END_OF_DOCUMENT_TOKEN_TO_BE_REPLACED

The Morse Crusaders was born out of the frustration of the 5wpm Morse tests and slow Morse initiated to help people get into Morse Code which is in reality proves to be detrimental to learner and leading to problems advancing to higher Morse  speeds and in some cases giving up learning Morse altogether. END_OF_DOCUMENT_TOKEN_TO_BE_REPLACED


QSL Card Design by Paul M6WAD
If you have found this website useful and would like to help the Morse Crusade then Please Donate which will help with the cost of helping others.